Q:  My spouse and I agreed to a prenuptial agreement that specified I would not have to pay child support in the event of divorce.  Will this agreement about child support hold up in court? 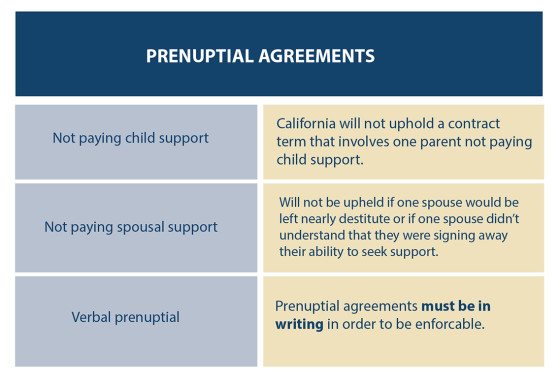 A:  It depends.  In California, the Uniform Premarital Agreement Act governs prenuptial agreements.  The law does allow a spouse to waive her right to spousal support in a number of cases, but in general the court must find that the provision isn’t unconscionable.  How does the court define an unconscionable agreement?  It will look at various factors, such as the disparity of wealth between the parties, the separate property of the spouses, and the earning potential of the spouses.  In situations where one spouse has waived her right to support but would be left nearly destitute without spousal support, a court may refuse to enforce the provision.

In addition, some courts may not enforce prenuptial agreement terms that waive spousal support in cases where the receiving spouse didn’t understand that she was signing away her ability to seek support.  For example, if the receiving spouse signed the prenuptial agreement without consulting with an attorney and didn’t understand that she’d be left without spousal support in the event of divorce, a court may not enforce that provision.

Prenuptial agreements can be very complicated, and it’s important to talk with a San Diego divorce lawyer about your situation.